The Kombucha mushroom, a fermented yeast enzyme tea, is thought to originate in Asia during the Chinese Tsin dynasty in 212 BC.  This Eastern Tea was referred to as the Remedy for Immortality or the tea of Immortality.  With the extension of trade routes it spread to India and Russia through travelers and traders.  Kombucha resurfaced in Japan between the Wars after a Japanese visitor to Kargasok (Russia) found this fermented tea drink responsible for their astonishing health, longevity and well-being.  A Korean physician may have introduced it to Japan by the name of Kombu around 415 AD. 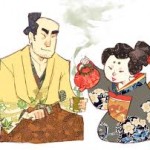 Today the tea – once routinely used by Samurai – is widely used again in Japan.  Kombucha appeared in Germany about the turn of the century from Russia.  The fermented tea drink became quite popular across Europe until World War II with the shortage of tea and sugar.  For hundreds of years a tea has been made from Chaga (a birch-tree mushroom) by the Russian peasants of the Alexandrov district near Moscow to cure cancer.  There is speculation that the Kombucha mushroom is related to the Birch-tree mushroom.   People in Russia have a long tradition of using a healing tea called “Tea Kvass” made from a “Japanese Mushroom”.  From Russia it spread to Prussia, Poland, Germany and Denmark. Today it is known and consumed around the world for its extraordinary health benefits. 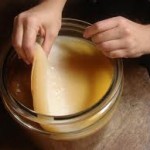 Anne’s Kombucha is a raw, freshly brewed, naturally effervescent fermented probiotic drink made by hand from sweet tea and a Kombucha culture known as a “Scoby” (Symbiotic Culture Of friendly Bacteria and Yeast).  The culture is alive and is a co-dependent blend of healthy bacteria, yeasts and other microorganisms.  Scoby is also referred to as a culture, mother, and baby.  Although there is little published research on Kombucha, the fact that it is still here today after 2000 years is a testimonial in itself and that millions of people throughout the world have found it to have great value for it’s amazing health benefits.

This site uses Akismet to reduce spam. Learn how your comment data is processed.